Ok dear readers, hold on to your hats because this week we are headed deep into post-apocalyptic, futuristic science fiction, dystopian, Twilight Zone territory. That's right, the future is now and it isn't pretty. Yesterday I discovered that certain companies have started including egg freezing in their benefits package for women employees so that they can focus on their careers and postpone childbirth. While I understand that this is hardly breaking news, it was new to me.

Living in my little at-home bubble that consists of school, writing, kids' homework, extracurricular activities and an alarming amount of time spent in my pajamas, sometimes I miss things. Sometimes I miss a whole lot of things. Luckily for me, The Husband brings these things to my attention thus alleviating any need for me to go out and discover this stuff on my own.

So this morning he was on his way to work and heard a discussion on the radio involving the NPR article, Silicon Valley Companies Add New Benefit for Women: Egg Freezing, and the New York Times article, Freezing Eggs as Part of Employee Benefits: Some Women See Darker Message. The idea is that benefits offered to women executives includes a costly elective medical procedure that will give women peace of mind as they focus on their careers. He immediately called me and said, "Oh honey, I have a great topic for your blog....are you ready?"

Having been a news piece for a while, places like Huffington Post are already filled with articles arguing for and against the practice. I am going to have to say, I definitely agree with the ones that argue that this is a disturbing answer from corporations in regards to the work/family balance. It feels an awful lot like the beginning of the descent into Aldous Huxley's Brave New World (where babies are created in factories). 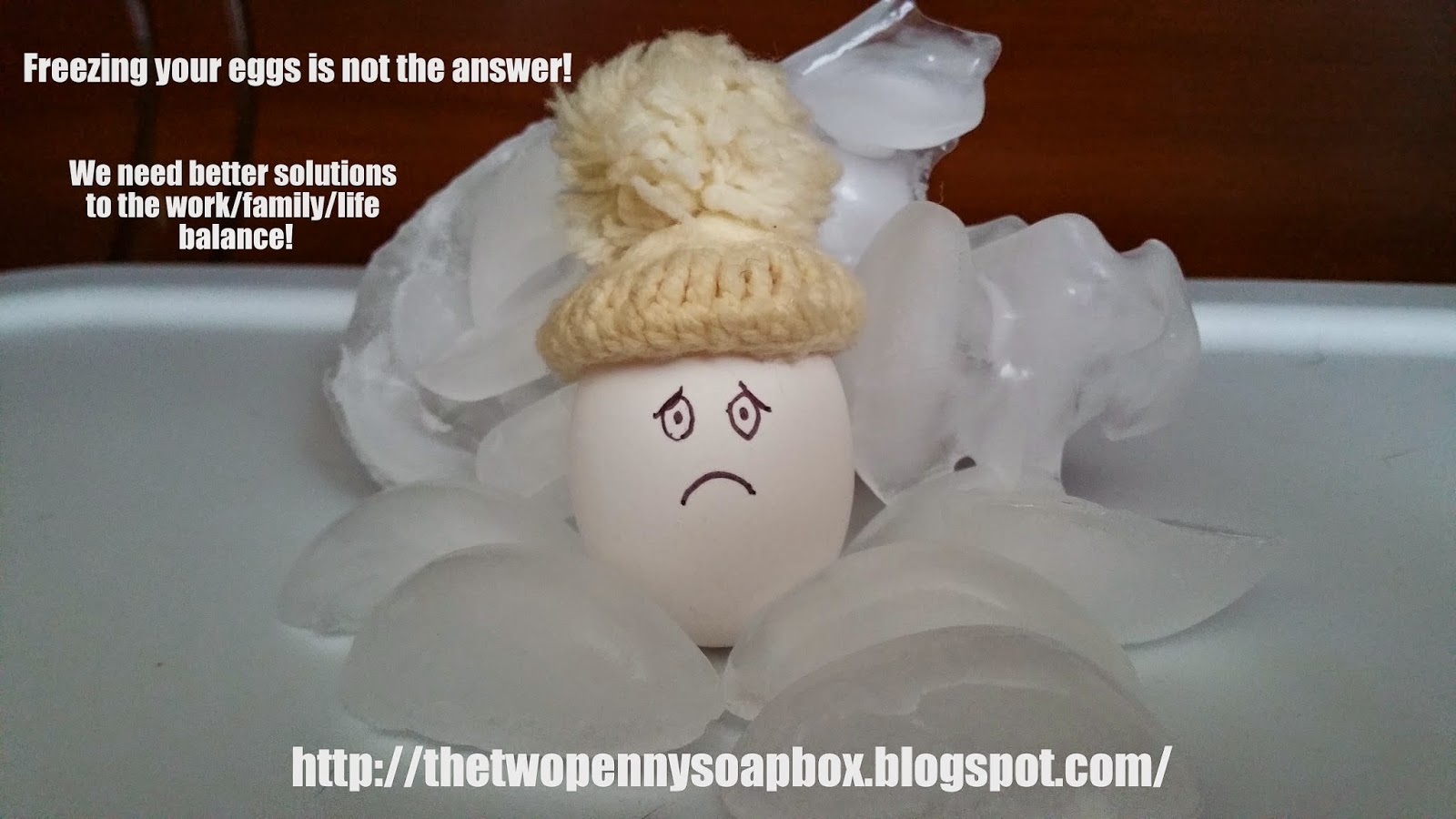 Putting off children, in my opinion, is dangerous, chancy and irresponsible. That sounds harsh, but I stand by the statement. Ignore the fact that pregnancy is far from guaranteed with frozen eggs, from my point of view, having children late in life just increases the chances that those children are going to be sandwiched in between elderly parents and young children (if they choose to have them).  If that happens, it only increases and intensifies the problems of work/family life balance choices for the next generation. Also, being raised by older parents increases the risk that their parents might not survive to see them reach adulthood. My father-in-law passed away three weeks after his 48th birthday. Most of my grandparents died in their 60s. It happens. I think egg freezing is an irresponsible choice for corporations, a figurative finger in the hole of the dam of work/family relations, temporary at best.

If companies really want to help their women executives, a much more fitting benefit would still be, and will always be, the inclusion of on-site childcare facilities for employees. Employees could go have lunch with their children, feel safe that they are well-taken care of and close by so the employee can focus on their work and ultimately work at a higher level of productivity. Also, it would prevent workers from having to run out early, or struggle to find care because the center would operate during the same hours as the employee. Quality would be assured by mere parental presence, extreme licensing would most likely be unnecessary.

Unfortunately the chance of companies creating on-site childcare sites is as likely as all of us getting magical unicorns to ride to work. It is never going to happen. The problem lies in the fact that we have increased insurance premiums on childcare centers to alarmingly high rates and imposed insane amounts of quality assurance legislation dictating environment and space. We did these things in the name of improving care quality, and we have, but at what cost?

Even our local gym that used to offer parents' day out programs had to indefinitely suspend them because the insurance premiums became too expensive to continue to allow parents to leave the premises. Premiums and quality control are significantly less if parents are on the premises, which should be good for companies, but most are not willing to take on that "risk" or "expense."

These companies would rather put in an employee gym (which they often charge for) or pay for two egg freezing treatments which can cost up to $20,000 rather than add a childcare facility for their workers. It says a lot about priorities. They are trying to appear family friendly, but as other authors have said, it only exerts subtle pressure on women to delay starting a family. Ultimately it is the simple solution of writing a check rather than the messier, long-term solution of taking responsibility for our country's families.

A true solution would be something similar to the crèche program in Brazil. Run by either the government or the Catholic church, the free crèches provide child care, education, basic health care and some of the Catholic-run centers even include a kitchen where workers can pay for an inexpensive, hot meal after picking up their children. As with any social system, there is a higher demand for services than availability, and quality varies, but for the families who gain access it is an invaluable tool in mixing child rearing with income production.

Imagine: A woman goes to work, dropping off her daughter on her way upstairs and works unhindered by worry for three hours. Taking a break, she goes downstairs and interacts with her daughter and a little with the other children and the teachers.  Mentally relaxed, she works productively for another hour and which point she heads down and has lunch with her daughter. Coming back in the afternoon she is able to focus and work undistracted for another four hours at which point she heads down, picks up her daughter and they head home.

If businesses were really truly thinking about bottom line productivity, they would realize that stepping out on a limb and embracing families might actually put them ahead, rather than behind. It is scary and financially adventurous, but if the studies about stress and overwork have shown us anything, it is that employees' health, welfare and productivity are greatly enhanced when their stress level is lowered. And nothing would lower a working Mom's stress level more than knowing her child is just downstairs, down the hall, or down the street. Bottom line is that 80% of women will eventually bear a child . Surely, if this is something that the majority of women are facing, we should do something about it.

Employers, please forget freezing eggs. Forget about pressuring women to put their career first before having children. Forget parental hiring discrimination. Embrace the whole family as a unit and you will have an employee that would probably sell her soul for you...or at the very least, her talents.