Since this is my soapbox, and I have free reign on what I say here, I am going to go out on limb this week and share an idea that has been rattling around in my head.

Before I get started, let me issue a disclaimer:
So, without further ado......

In the last ten years, certain news stories have grabbed attention in the press. News stories covering the statistical increase in life threatening allergies and autism have posited many possible causes. They have suggested an over-hygienic environment, increased chemical exposure, an expanded ability to recognize and identify the conditions, and a broader definition. These may all be true. The CDC reported, "the prevalence of food allergies increased from 3.4% in 1997–1999 to 5.1% in 2009–2011."


What recently caught my attention was an article on the increase in early-onset of puberty. In fact, the average age of the onset of puberty has fallen five years since 1920.  After doing some more research I found that the two commonly agreed upon causes appear to be phalates disrupting the endocrine system and obesity. In then occurred to me to start looking into early menopause rates. Unfortunately, the only article I could find was from the UK in 2011, but suggested a similar causation from chemicals, Perfluorinated Chemicals (PFCs). Although the article did suggest there might be a correlation between early puberty and early menopause. An article in Scientific American from February of this year confirmed that PFCs and phalates appear to be the primary causes of early menopause.

Lastly, take the statistics on average age of childbearing, which evidence suggests that the age that women are having their first child is increasing. In 2009 the CDC released a report, "Delayed Childbearing: More Women Are Having TheirFirst Child Later in Life" Additionally, another report on births in 2013 stated, "Birth rates declined for all women under age 30 in 2013 from 2012, rose for women aged 30–39 and 45–49, and were unchanged for women aged 40–44."

While on a trip to work on a current long-term project, I got in a discussion about allergies in the classroom. Another mom and I were discussing whether or not lunch options should be limited for kids without allergies in order to accommodate the child with the allergies. Her take was, since they are so rare, those children should be treated like their allergy is a disability and understand that they are going to have to plan accordingly. I argued that they were, in fact, much more common and that it is important to make sure those kids are safe at school, at the very least at the elementary level, until they are able to protect themselves more efficiently.

It quickly became obvious that we had very different experiences in regards to allergies. This evidence is purely anecdotal, but during the discussion we realized my children have TONS of kids with allergies in their classrooms, while she could only think of a few kids in any of her four kids' classrooms over 12 years of school experience. Unfortunately, I could not locate allergy rates broken down by state, so whether our experiences are unique, or more wide-spread, I can't say.

It began to run through my mind, that if girls are starting puberty earlier and earlier, and women are having babies later and later, than surely there must be some ramification for that. Could increased increased allergies and autism be linked to older eggs, in addition to chemical influences? Are the health affects that are incurred from the earlier onset of puberty adding to the increase of these issues?

If what we discussed is true, and Texas really does have less incidences of food allergies, than it is possible it is linked to maternal age. Looking at the following map off of the CDC's article the age of mothers when their first child is born, you can see, Colorado has a much higher maternal age than Texas. It would be interesting to see if allergy rates are higher in the darkest blue states in Washington and on the East Coast and lower in the light green states. 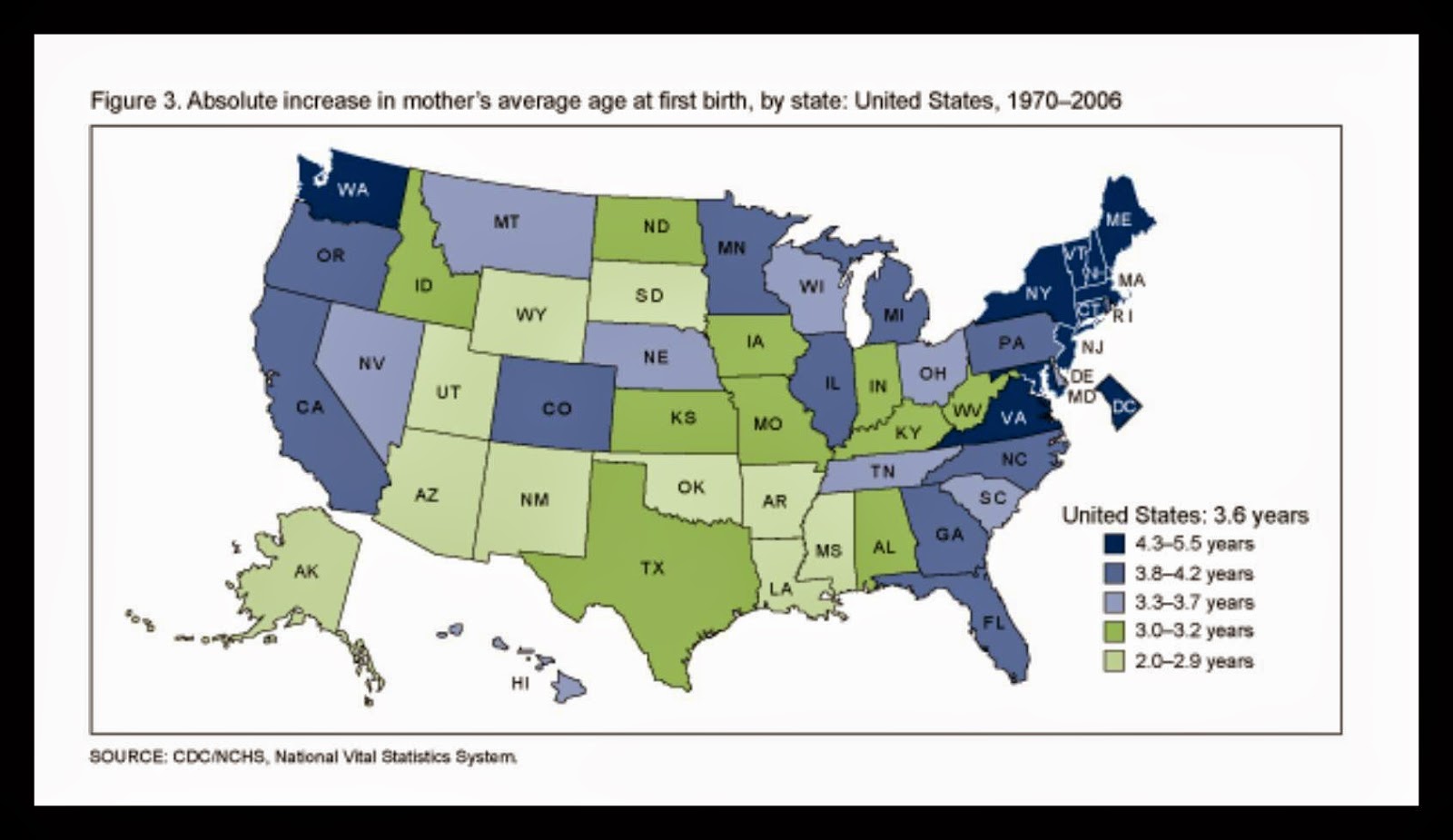 Short of extensive, long-term scientific and census research, we may never know. But, it seems it might be food for thought. Maybe seeking to delay childbirth (see my article on companies adding egg freezing into their benefits package) is a more impactful decision than we thought. Maybe instead of delaying childbirth until couples have more time and resources, we should instead find a way to support younger families with more limited resources. It would take a huge cultural shift to bring the average age of childbearing back down, but perhaps it is worth it.