Everyone remembers that first time walking into class, or into the gym or onto the field and having to navigate being the newbie. It is even harder when it is somewhere with a pre-established order. For some, these challenges are met with a bravado and/or gusto, for others it is met with terror and uncertainty.

But what if you're 40? (For the record, I am not quite 40 yet...but I am close enough that I am pretty sure it counts. Also, "Fitting in at 39" just doesn't seem to have the same ring to it.) Supposedly these things somehow miraculously get easier as you get older........right? Shouldn't there be some magic spell cast over you the minute you push that tiny infant from your body that immediately imbues you with some power to navigate social situations with grace and aplomb?

Unfortunately for all of us, such a spell doesn't exist. This is most unfortunate for the poor individuals who have to come across me on high anxiety days. The depressing truth is that all that crap in school that we promise our kids, "gets better after high school" is quite frankly a BIG. FAT. LIE.

Sure, there may be a period of time during college where this may actually be true for some. This is the time period when you are an adult, responsible only for yourself and beholden to none. This is the only time in your life where you have the freedom to walk away from people you would not care to associate with. If someone annoys you, or proves to be a bad friend, you move on.

Single people might read this and scoff, but I guarantee every parent out there will read this and nod with understanding and resignation. The freedom of early adulthood can be extended into parenthood with the first child, up until a certain point.

When my first child was born, I worked two and a half days a week. The rest of the week I was at home while my husband worked 10 hour days and went to school at night. Desperate for adult company I joined Mom's groups like Stroller Strides, Mountain Mamas and MOPS. I gravitated towards Moms that I genuinely liked and got along with.

These Moms and I made playdates and park dates and coffee dates. We did this because when kids are little it doesn't really matter what the age differences or personality differences are. Babies and toddlers parallel play and preschoolers can play with just about anyone. But, as the kids grew older, it became harder and harder to get together.

The kids started to reach school age and suddenly I was getting pushback. My kids didn't want to go hang out with certain friends of mine anymore because their kids were either drastically different in age or personality. They had an increasingly harder time finding a way for everyone to play together. My playdates weren't fun for them anymore. They would ask me if I could just make plans with my friends without dragging them along. I doubt the pushback was one sided. Additionally, with the onset of extracurricular schedules it became increasingly difficult to make plans with the friends I really wanted to spend my time with.

The flip side of that is that my kids were making their own friends at school, dance, soccer, church, Vacation Bible School and so on. Sometimes my girls would absolutely "click" and would adore a new friend. Then I would have to initiate small talk and exchange information. Sometimes I would call and leave a message about making a playdate......and get crickets. Later, I would sidle up to the Mom of the girl my daughter was begging to have over, but whose mom hadn't called back, and I would try to strike up an conversation. Instantly I would feel like I was back on that first day in a new school. I would have to go home and tell a tear-stained face, that I just didn't think a playdate with little Emmaleigh was going to happen. Then I would lie and say it was because they were too busy. And my heart broke a little. My daughter was in tears because I couldn't be likable enough.

People who know me on a superficial level typically either think I am outgoing, take-charge, and confident or irritating, over-talkative and scatter brained. People who know me really well would probably not use any of those words to describe me. The truth is I subscribe to the fake-it-till-you-make it school of thought. Many times I fake it fairly convincingly, putting me in the first camp...that is, until I don't. When the chinks in my armor start to show through, that is when I start fall into the second camp. In addition to being a full-on introvert, I often suffer from frequent social anxiety attacks. When I start to feel it coming on, I kick into my "won't shut up mode." It is like a darkly comedic out-of-body experience as I float about my body and scream at myself, "Seriously, why are you still talking? Shut up already. Can you not see that woman is annoyed with you!?! OMG! Are you really telling that story NOW, you just met this woman! Great. She just looked at her phone, take the hint moron.... There has got be something around here I can knock you out with..... AAAAAAHHHHH."

The result is that I have a tendency to be less likeable when I am nervous. This only serves to ratchet up the pressure on first meetings when your socially challenged daughter tells you that she HAS to have a playdate with the best little girl EVER or she is going die A MILLION ZILLION TIMES. Suddenly I am forced to find a way to fit in, not because I want to, but because I am convinced that my daughter's happiness (and not being a social pariah) are at stake. Also, so I don't hear crickets on the other end of the phone.

In the old days, before our unrealistic obsession with zero percent mortality and constant child supervision, our parent would just turn us out to play with whomever we found in the neighborhood. Or they would drop us off at a friend's house after they talked to their Mom for about 5 minutes on the phone, just to make sure she would be home and wasn't psychotic. Risk was just part of childhood. To be honest, I am not even sure about the psychotic part, it is just something I would like to think my Mother cared about. Mostly she just needed to know that an adult would be present.

Now when I offer to host another child I get asked things like; who will be there, do I have a gun in the house, am I planning on feeding their precious hot-house orchid anything that isn't organic, no-sugar, health food and what exact schedule was I planning on following? (Yes, I actually got asked that once- "uh, I thought I would just let them be creative and come up with something?" Note: This child was not allowed to come to my house. My choice. Too much pressure.)

These days we practically have to background check each other before allowing our children an unsupervised (by us) social interaction. Often the Moms choose to be present, thus forcing social interaction between them. This brings me back to my point; fitting in at 40. How do I navigate a world that has suddenly become dependent on me making friends with the entire families of my children's friends? And does this mean that I have to sacrifice MY friends in the process?  Do I sacrifice the people I would choose to spend more time with if I could just find some child-free time?

How can I fit in now at 40, when I was terrible at fitting in as a child? As an adopted only-child with parents a full decade older than most of my friend's parents (1950s vs the dramatic change in social mores that was the 1960s), I was an awkward, socially incompetent and strange child on the best of days. Things aren't that much easier now. So, if you thought you were going to get to the bottom of this page and get some answers, I am afraid I am going to have to disappoint you. I don't have the secret ingredient to fitting in with the local Soccer Moms or the PTA.

Instead, I would like to point out that, if what I suspect is true, we are all struggling with this new phenomenon. I suspect that every Mom in the dance studio waiting room is secretly wondering how she is coming across to the other Moms and she worries if she has presented herself in a positive enough way that little Sally's mom would possibly consent to letting her come over for a tea party playdate next Saturday.

Let's find a way to give each other a little grace when it comes to interacting. Some people put their best face forward in other arenas besides the stilted small-talk during drop-off and pick up at school or on the sidelines of a sporting event in between plays.

And just because you wouldn't hit up Starbucks with your child's best friend's Mom, doesn't mean that their child isn't a worthwhile addition to your child's life. You don't have to be best friends with them, you just have return a phone call.

Let your child have their friends, and get back to having your own. I know that is what I want to do. I want us all to let go of the control, just a little. I think we would all be so much happier for it. 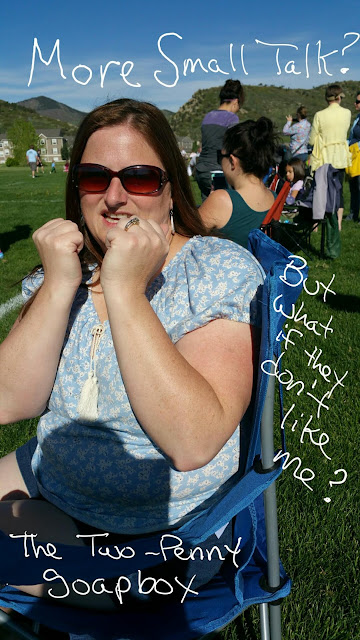