In my humble opinion, potty training has got to the be the hardest, most frustrating time of parenthood. I understand it doesn't work that way for everyone, but for me I have struggled with not one, not two, but three hard to train preschoolers. I would have had more children, but I waived the flag when I realized that with the time and money that I have spent training my three, I could have trained six "normal" kids. I have gathered a plethora of information on how to handle potty training parents you know who might be struggling. So here is a list of 5 helpful suggestions on what not to say to parents of late potty trainers:

1. "Oh, is she still not potty trained?.....How old is she now?" - Yes, I get it. My kid is still in diapers, thank you so very much for pointing that out to me. Furthermore, your question about age is really just a thinly veiled judgment, rude at best and insulting at worst. You and I both know by listening to her talk and the fact that she is a head taller then a normal sized two-year old clearly means she is "too old" to be in diapers. I get it. This question is in no way helpful and actually makes me feel more horrible about the situation than I already do. Don't. Just Don't!

2. "You know what worked for me..."- Trust me when I tell you that any parent whose child is over the age of 3 1/2 doesn't need to hear this. We have already Googled every method we can think of, read every book, talked to our pediatrician, experimented with strategies, and bashed our heads against the wall at least half a dozen times. There is a very high probability that the miracle solution that you are about to proffer is not something we need or want to hear. Unless specifically requested DO NOT tell me how your magic bullet was the M&M method, bare bottom drills, sticker chart, jelly bean jar, offering him something he really wants or making him want to be part of the big kids. Been there done that....now I have to go change another diaper.

3. "Well I just made them change/clean up after themselves."- Seriously? How does this even work? I attempted this method with my middle child when she was approaching four and do you know what it got me? A bathroom covered in *redacted* and a whole stinkin' (literally) load of laundry. What it did not produce, despite 4 dedicated weeks, was a potty trained child. In fact, I would pay good money to meet the child that this method actually worked on because I feel like they would be akin to a unicorn or the Loch Ness monster - pure fantasy. 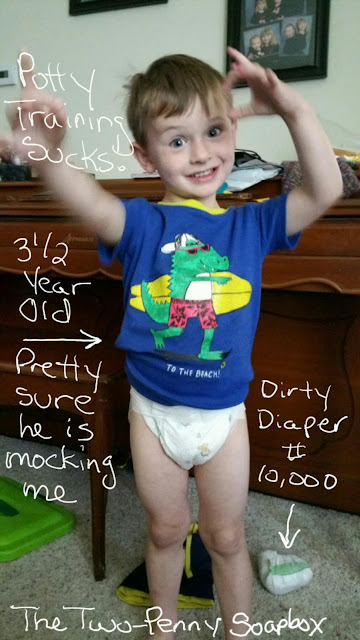 4. "Well all children potty train in their own time." - This statement in itself is not actually that offensive, but it so frequently is what is proffered after the three sentences above have already been covered. They start out with, "Oh, not potty trained yet?," and move on to, "well, have you tried...?," and finish up with the lame, "well, you know, kids do things in their own time." If you want to close down an uncomfortable potty training conversation with a poor soul whose child is clearly not as advanced as your precious angel, just say something like, "I am so sorry, that sounds frustrating. I will send good thoughts your way that it is over soon."

5. "My child potty trained in X-days at X-age." - Pretty much anything along the lines of indicating that your child potty trained in 3 days at 18 months is bound to be met with jealously and resentment by anyone still having to change disturbingly large diaper disasters at the age of 4. I feel a little piece of my soul die every time I hear my almost 4 year old say, "Mommy, it is time to change me." It isn't that we don't want to celebrate your amazing success, it is just that right now, in the thick of our frustration we most likely can't dig deep enough to get past our own angst. If you know someone is struggling with potty training it is best to avoid sharing those stories with them until it is all over. Then, and only then, is it okay to say, "I felt so bad for you having to deal with that for so long, you know little Jr. only took 3 days to potty train at 18 months and it was just so easy." It is safe at that point because then we can sit quietly in our own smug superiority and think how we had to fight in the trenches and persevered. We didn't have it handed to us on a silver platter.

I hope this list has helped you. Remember, just like you can't force an anorexic to eat, you can't force a potty resistant child to "get over it" and start using the bathroom. Parents of late potty trainers are often stressed out, frustrated and just a little bit jealous- so tread carefully. We will get there too- eventually. As it is so often stated to me by others, "most kids don't go to kindergarten in diapers."