The Changing Face of Parenting: Pornography and Pre-Teens

It has recently come to my attention, as I talk to parents whose children are older than mine, that parents today no longer have the option to parent the way our parents did when it comes to sex and sexuality. After talking to parents of pre-teens and doing some research, I have found that nearly half of all pre-teens have been exposed to sexually explicit material of some kind, whether willingly or unwillingly.

Gone are the days of the simple birds and bees discussion, which focuses mostly on mechanics. Gone are the days of the occasional Playboy or romance novel found hidden in the closet or under the mattress. As parents, we no longer have the option to avoid the subject of sex, sexuality and relationships. With an ever-increasing access to graphic pornographic material (read: an ever-increasing level of access to internet-capable mobile devices), we no longer can afford to put off the discussion of sex and sexuality until the onset of puberty (which is also starting earlier).

When I was little, my parents gave me the ever-classic Time Life book, "How Babies Are Made." I also received a book about my changing body. I don't remember exactly how old I was, but I want to say it was somewhere around 9 or 10. Puberty hit not too much longer after that, so it was probably good timing. In my experience, I was the first one in my class to hit puberty, but 10 1/2 is no longer considered early. With earlier exposure to hormones, and sexual images, our children are having to deal with these concepts much earlier than we ever even thought of doing.

Last week my oldest daughter, Snowflake, asked me, "Mom, what's a virgin?" It took me a minute to realize where she was getting that word. Then it dawned on me that it was from a commercial for the new show, "Jane the Virgin." I told her it was late, and I didn't want to answer her question right then, but if she asked me again tomorrow we could talk about it. I was hoping she would forget, but no. First thing the next morning she repeated the question, "Mom, what's a virgin?"

"OH CRAP!," I thought. I forgot to prepare an answer.

On the fly I explained that it mostly had to do with something I didn't feel ready to discuss with her, but involved the process for how babies are made. My explanation mostly revolved around the fact that the virgin Mary conceived a child without a husband, and that the show featured a character whose irresponsible doctor was trying to help a mommy get a baby in her tummy, but that she put the baby in the wrong tummy. (Which I have to say, sounded WAY messed up when explained at a 9 year old level.)

I assured her I would discuss everything in detail at some point in the future, but that I didn't feel she was ready for me to discuss it with her at that moment. Lucky for me, about a year ago, she insisted she wanted to watch a scary movie (Robocop 2) with Daddy and ended up getting freaked out by something she saw. I used that as a reference point about how we have to guard what we see because you can't un-see something upsetting. (For the record, I have a scene like that too. It involves pushing someone's face into burning oil on "MI-5." I can't fry anything without thinking about it.) I told her that I could explain the whole virgin thing in more detail, but once I told her, I couldn't UN-tell her and it would change the entire way she sees the world.

Thankfully, she seemed to except my explanation, and it felt like we dodged a bullet. But, I realized the time is coming faster than I would like it to, when I am going to have to sit down and discuss these things much sooner, and in much greater detail than my parents ever would have thought of doing. I am dreading it. But, I know by not doing it, or by ignoring it, I will only be making my kids more vulnerable to all the crap that is out on the internet.

Parental controls on mobile devices are great, but they only go so far, especially when kids are expected to bring tablets, phones, and other internet capable devices into the classroom for projects. Many school districts require kids to have tablets because, in effort to save money, they provide digital textbooks.  Often times, legitimate websites are blocked by parental controls, causing kids to have to call home to get the password in order to maintain required access to complete assignments. This quickly renders parental controls obsolete leading many parents to abandon them.

With children online for schoolwork, it provides the perfect "cover," leaving many teens semi-unsupervised while handling an internet capable device. These kids are technological experts at clearing search histories and covering their tracks, so that many parents are unaware of how much time their children are actually spending online. One study interviewed parents and found a 3-4 hour a day discrepancy between the amount of time teens spent on the internet vs. the time their parents believed they spent online.

We are going to need to give them to tools for their toolbox, so that when they come across a graphic scene depicting violence or non-consensual sex acts, they have the ability to recognize what they are seeing and file it in an appropriate place. Talk and trust is the only hope we have to help our children navigate this new digital age.

I know I am going to have to do this soon, but the thought wakes me up in a cold sweat at night. My parents hardly ever held hands, kissed, or otherwise showed affection in front of me (although it was always clear they loved each other), and in all my years at home, I think I must be the only child in America who never heard her parents having sex. Because of this, the idea of having these discussions with my children makes me sick to my stomach. But, I know I have to. We all have to.

In our day in age, leaving kids to figure it out for themselves was a relatively safe choice. Sure the Playboy or Penthouse might have been shocking for some children, but those were static images in magazines. They were rare to come across, and the image didn't change. The pornography that our children will most likely be exposed to at some point in their adolescence, whether accidentally or on purpose, will be typically be graphic, video based, and easily accessible. The potential for it to become a real problem is ever-present.

Pornography is not ever going to go away (visit the Sex Museum in Amsterdam if you don't believe me, ancient artifacts with dirty carvings on them prove that sexual images have existed as long as humans have). Our children are going to come across it. The question is, do we have the type of relationship with them that will allow them to come to us and discuss what they see? Will they have the tools to recognize the difference between fantasy and reality? Will they understand how not to objectify their sexual partners? The only way to be sure is to talk about it. 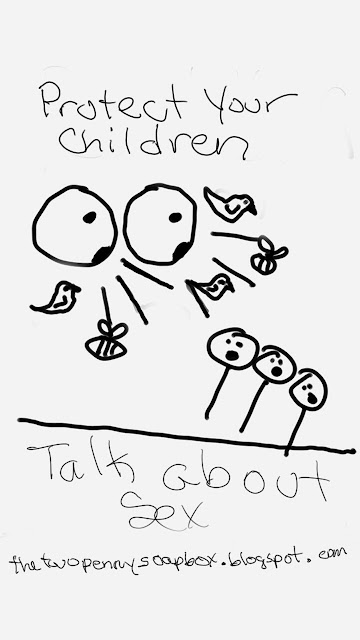