Mothering in the Media: A History Lesson

As a mother I would love to tell you that you make all of your decisions based on your own moral compass and sparkling intelligence. As an anthropologist I can tell you that you don’t. We all make decisions so that they fit within our personal cultural restraints: ethnic background, socioeconomic status, religious beliefs, and level of commitment to community involvement (ie: level of conformity). We also, whether we like it or not, make decisions based on media images that guide us (which is why things like Bratz dolls are such a hot button topic in their influence of young girls and self-image).

Now motherhood in the 1950s was painted as idyllic. We are talking big neighborhood bar-b-ques, coiffed women, the dawn of the convenience appliances, and the existence of the “family wage” where the economy was designed around the one-income household. 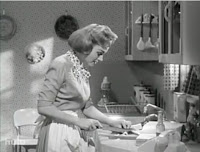 Yep. Donna Reed, the original domestic goddess. Sometimes I close my eyes when I am vacuuming and pretend that the baby isn’t howling, the girls aren’t fighting and there aren’t a pile of dishes in my sink that are threatening to take over (just like that old Shel Silverstein poem about "Sarah Cynthia Sylvia Stout Who Would Not Take The Garbage Out"), and pretend that I am channeling her perfect charm, grace and domestic perfection. Then I open my eyes and remember, I am a real flesh and blood mom, not a media creation.

Bring in the media images of mothers in the 1960s and 70s…this was post-Betty Friedan, author of The Feminine Mystique. We are talking about the introduction of the stay at home mom as mired in an ideological stranglehold, “the problem that has no name.” The irony is that by cutting mothers out of the new feminist equation that was taking hold, or even worse, seeing them as part of the “oppression,” the women’s movement not only failed to integrate the very people they were trying to “liberate” but they sowed the seeds to a long history of American devaluation of motherhood. Specifically, the 60s introduced the idea that women who stayed home were oppressed, uneducated, wasting their time and therefore we should pity these poor creatures who are trapped at home with children like second class citizens.

Next on our voyage we get the workforce explosion of the late 70s and 80s. The media now becomes dominated by the “super mom,” a woman of super-human potential. She is the idealized worker, idealized mother and idealized wife all wrapped up in one well-dressed and fit little package. Suddenly the media becomes filled with the idea that women really could “do it all.” This mom was born out of the equal-rights movement and represented the hope for all women’s future as leaders and innovators.

By the end of the decade, pushing into the 90s, books like Arlie Hochschild’s, Second Shift began to shed light on the fact that while women may be working more in the traditional income producing sphere of the workforce, men were not working more at home, therefore, all that women had gained in leaving their homes was a second shift of work.

At this point the media became flooded with articles that indicated that working women had failed their children by exposing them too soon to the outside world. Stories abounded of things happening to latch-key kids, or daycare fatalities, child molestation, care giver neglect. It was really during this time that the media latched on to the “Mommy Wars” as a catchphrase and salivated at its wonderful ratings-generating potential. Motherhood is all American, but mothers pitted against mothers has the appeal of a roman gladiator battle; it’s going to be bloody and someone is going down.

All of these media reports fueled the next round of media images.

The 90s and the early 2000s were split between the career “super mom” and a new breed of mother, a woman who bought into what some called “the cult of motherhood.” With the economic downturn and recession in the mid-1990s the large scale job loss led to a re-evaluation of women’s roles and responsibilities as well as a community focus on the overall well-being of children and their development. Enter onto the scene the attachment parent who brought with her the renewed focus on the moral superiority of the stay at home mom. After all, the working mom was risking her children’s very lives by leaving them at child care. This new self-sacrificial style of motherhood demanded nothing short of subsuming a mother’s needs to the needs of her child in all things. This new round of media images implied that discipline or criticism of a child was a damper on their inner creativity and self-esteem. This “new momism” created a push of women to return home from the boardroom, so to speak, because it promoted the idea that a mother was the ONLY acceptable care giver for a child.

All these media images did was create stereotypes and belief systems which allowed women to set up and fly flags from their various camps. This can be seen recently with the conflagration over Hillary Rosen's comment about Ann Romney having never worked a day in her life. Somehow, in the process of each decade trying to define its own idea of motherhood, the previous ideal seemed to end up being devalued. Now, as we realize how many different ways there are to mother, we should also stop to realize that each Mom is making those decisions within constraints that are beyond her control. Short of a drastic move to another country, or a sudden loss or gain in fortune, her cultural constraints are constant.

By recognizing how motherhood has changed over the last 6 decades we can clearly trace the birth of the “mommy wars” and how they have continued. And knowing that, we should be able to step back and stop them. We can create a community of support which I personally think is more helpful than a community of moral superiority.