The Danger of Choices

Anyone who is, or has parented a toddler can tell you that giving them too many choices is like taking the fast-train to Meltdown City. There is a reason for that. Children can get overwhelmed and stressed out by too many choices. Give them too many, too often and they can begin to expect them, developing a Machiavellian-sized sense of entitlement and of their ability to influence the world.

But, news flash...it isn't that much different for adults.

When I was living in England I was eating a small café with a friend when I ordered a sandwich, "could you please hold the tomatoes and can I get that on the whole wheat bread instead of the onion bread?" Yeah. I am pretty sure the look the waitress gave me at that point was because she was trying to decide if I was some sort of royalty in disguise, an alien from outer-space, or perhaps both. Then she said, very politely, "Perhaps you would prefer to order something else then."

And there it was. She didn't say "no," but it was implied. I cringe when I look back on myself at that moment, at the entitlement and offense in my response. I turned to my friend and started griping about how incredibly rude the waitress was and how "it wasn't like I was asking her to remake the entire sandwich, just make a couple of small substitutions." And there it was, right there in my belief  that exceptions had to be made for me for no other reason than I wanted them.

Luckily for me, my friend was very understanding and explained what I should have already remembered; that I was in a foreign country and I certainly wasn't in Kansas (or any other American state) anymore. Apparently in England (and possibly everywhere that isn't America, I can't speak to that) you order what is on the menu. Period. If you don't like something or are allergic to something, then you order something else. Because it actually isn't as simple as it sounds to make constant substitutions. The thought being, constant substitutions increases the possibility that the product quality can decline or mistakes can be made.

My friend lovingly and patiently explained this to me and then told me to, "either order something else, or pick the tomatoes off the sandwich, and stop being so bloody American." This then led us to discuss the new Subway opening up in London and how it was such a novel concept. The idea that you could build your sandwich with so many combinations was mind-boggling to her (and as she reiterated, so typically American). She thought that perhaps she might never go there because the choices would be too overwhelming. She also said the same thing about coffee houses which were not popular in England where they tend prefer pubs instead.

"You Americans have too many choices," she said. "You seem to need all those choices because you all are so set on being unique. You founded your country on freedom, but then you just let it run wild. You expect that everything in your lives has to be customized, reconfigured or rebuilt to each person's unique tastes and preferences. That is just madness."

I thought about and realized she was right. After I moved back to the states I started noticing how much more customized everything was here. We customize our phones, our shoes, our food, our television, we customize anything and everything. We even market it that way.

Take Burger King's famous "Have it your way" slogan. Or the ridiculously American notion that "the customer is always right." We give consumers too much power sometimes, too many choices.

Buying a cup of coffee is no longer an act of being thirsty or needing a jolt of caffeine; it is a chance to flex your unique triple-shot, non-fat, no-foam, vanilla latte, hold-the-whip-self. Brides are forced to agonize over what centerpiece will truly reflect their authentic selves. We have to decide what to watch when we have access to Netflix, Amazon Prime, Xfinity On-Demand, and 150+ channels. If you are like me, then some days you just spend an hour endlessly flipping not really taking in anything. We waste so many hours trying to pick the perfect phone, shoe, t-shirt, or car that will reflect our personalities. We do this, because if we choose wrong, then we aren't projecting what makes us, well us--anxiety ensues. 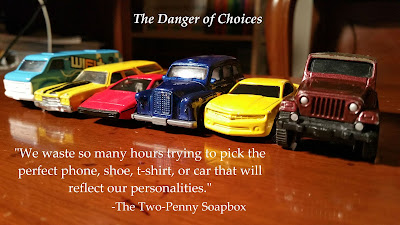 We are all a bunch of toddlers with too many choices (yes, even me).  Barbara Meltz, a fairly well-known parenting consultant writes, "...children of all ages feel most secure when they know what their (again, age-appropriate) limits are, when those limits are consistent and when there are consistent consequences for infractions." I would argue that it isn't just about children. Adults can get overwhelmed from too many choices. We spend needless hours on picking just the right -- whatever it is we are buying. Think of how much time we would get back if we limited those choices.

Apply this quote from Meltz to adults and you will find it doesn't sound too far off;


...giving them choices and/or control for the wrong reasons, they end up feeling anxious and insecure. And that, in turn, can contribute to a whole array of behaviors that could include tantrums and sleep issues.

Anyone who has ever worked a customer service desk can tell you all about adult tantrums. Even I have not been immune to it; I lost it at a counter once because I had been to three different stores with the promise that the next one would have what I wanted, a very specific color of dishes (this was before England). Did the color really affect the food? A dish is a dish. It is the intense pressure of all those choices. Everything has to be perfect.

So here it is, an idea that is bound to be wildly unpopular -- Perhaps we shouldn't allow people to customize their own gear like Nike does. Perhaps we should just order the sandwich offered and pick off the tomatoes, or go back to the menu and order something else.

**disclosure: the event described happened over 15 years ago, British culture and opinions on choice may have changed by now.