How America is Shooting Itself in the Foot

As an anthropologist, I have become frustrated by certain subjects that have come up in recent news stories. News stories about things like; the dangers of technology for children under 12, the growing obesity epidemic, the increased awareness of fat shaming, how the American work week has increased in hours, and of course, the previously discussed topic of pressure on parents to supervise their children 100% of the time.

What I see, from an anthropological perspective, is that all of these disparate things are actually all very intimately interlinked with each other. There is not one issue on that list that is not caused by, affected by, or is the causal effect for something else on the list. America is shooting itself in the foot by focusing on the symptoms, but not recognizing the underlying issue. 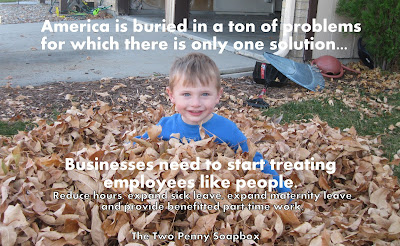 Americans are putting more hours in, for less buying power and less vacation/sick time than at any point in history. Because of this, we are experiencing a severe time crunch in regards to outside of work activities (not to mention a spike in stress and depression related illnesses and a decrease in overall health-but that is a topic for another day).

We complain about obesity and yet we live in a fast-food, convenience food culture. Our culture demands that workers eat to live vs. live to eat. Take certain European cultures like France, Spain or Greece in contrast. These countries have a thriving culture of  the importance of experiencing food as a family event. Because of this, businesses set aside specific hours to honor that. In America, your average retail worker gets 30 min for "lunch,"  which depending on the schedule, can often be at odd times of the day. Our workplaces are not concerned about our health or our enjoyment of our nourishment, it is merely a means to an end, a necessary step to productivity.

With people having less free time and eating more instant food, or restaurant food, we have a growing problem with obesity in this country. Childhood obesity has specifically be targeted as something that America needs to address imminently. As a result, a host of organizations have sprung up in the past decade in attempt to change things. In rare, but increasing cases, governing agencies have removed children from their parents for being too obese.

The most common answer to childhood obesity? Encourage parents to make sure their kids get outside as much as possible. Then add in all the stressors on parents about not letting children experience too much "screen time" and exposing them to more nature. These articles frequently come in fear-mongering style about how without more nature and less technology your child will end up fat, stupid and riddled with issues like ADD, Sensory Processing Disorder, depression, anxiety, and technology addiction.

But wait! You are absolutely NOT allowed to let them outside without proper supervision, which means that you need go outside with them. They should only have 30 minutes to 1 hour of screen time, which means a huge chunk of time should apparently be given to supervised outdoor play. If you send your child outside or up to the park unsupervised, beware. You will probably receive a visit from Child Protective Services for neglectful parenting because limiting screen time is really only a secondary priority to constant supervision.

Now let's revisit the first paragraph. As previously mentioned, parents are in a time crunch. They barely have time for family and caregiving as is, and they certainly aren't given the space or opportunity to really sit down and make and enjoy a good meal. So how the heck are they going to supervise their children outside for large periods of time? That right, they aren't. Parents can barely skate through their existing responsibilities, much less add intense child supervision to their list.

So, out of fear of that well-meaning call from a well-meaning neighbor to social services about children running around unsupervised, parents lock their kids up inside and pacify them with screens. This is done out of survival, not out of laziness. Then we are bombarded with guilt that we are failing our child somehow. We feel victorious when we get something on the table that doesn't come from a box, and where everyone sits and eats at the same time. We constantly feel pushed and pulled between what we "should do" vs. what we "can do."

Use of convenience foods and lack of exercise lead to obesity. Obesity leads to fat shaming and lack of opportunity. Lack of opportunity leads to long hours in poorly paid jobs.....and we have come full circle. The only way we are going to break this ridiculous cycle is when businesses step back and realize that taking care of caregivers and families, or in other words, taking care of their employees as people, is the sole path to change.

Start "Valuing Families" and many of these "American problems" will self-correct themselves. So writers, I beg you, stop writing about how parents or society can do better and focus on how businesses can do better. Focusing on caring for employees can strengthen a business in the long run, obtain higher productivity and less time out for health issues. It really is a win-win for everyone.
Posted by Amie Perea