The Long Suffering Wife (or The Awesome Husband)

It occurred to me that in in all the time of writing my blog, the only real description I have ever provided for my husband (other than mentioning his obsession with gaming politics) was in one of my earliest posts about logic versus emotional argument. After witnessing a conversation between him and my oldest, I realized there is no way you can have a complete picture of his awesome quirkiness if I don't share him with you.

*As an aside; even people who have met him often don't know how bizarre his sense of humor truly is because he is very introverted....not shy. He is perfectly capable of making a fool of himself in public or getting up in front of a crowd. In fact he would prefer to do that then actually talk to someone one on one. As a result many people perceive that he can be rude, stand-offish or arrogant. In fact he is none of those things, he just doesn't want to talk to anyone. In six years he has had exactly five conversations with our neighbors, and none lasting much more than a hello.  And so, the only people who really get to see his real personality are me, the kids, relatives and his co-workers, because the joy/struggle of working with the same people 40 hours a week for years means that you can't hide your personalities from each other. Many of his friends don't even really know how quirky he actually is.

So the conversation that sparked the idea for this post is as follows;

Snowflake: *reading her latest non-fiction book* Dad, did you know there are only 30 Tigers left in the wild in China?"

The Husband (expressionless, as if delivering facts): Yes. That is because they look so tasty. That is why there aren't many left. (licking his lips) Mmm. Mmm.

Snowflake: DAD!! I said there are only 30 Tigers left!!! That isn't funny.

The Husband: Well, after I am done, then there will only be 29 left.

Snowflake: *snapping her book shut and sighing heavily* I am not talking to you about this.


This is not an uncommon conversation in my household. It reminds me of the time that The Husband tried to convince the girls that they were actually hatched from eggs, or when he constantly tells them to stop calling him Dad and call him Uncle Bob or Mommy instead, or when he recently taught my 3 year old son to respond to the question, "Who's your Daddy," with, "The Mailman." *sigh*

Raindrop has a unicorn headband that she is in love with and The Husband insists on treating her as an actual unicorn whenever she is wearing it; including asking her to eat hay, putting her dinner plate on the floor and "trying" to chase her down and capture her.
(Enter Raindrop, wearing her unicorn headband)
The Husband: *gasp* Oh my goodness it is a real life unicorn. (lunging) Grab her.

Raindrop: (ripping the headband off) DAD! Stop it.

The Husband (looking around): Raindrop? I just saw a unicorn! Did you see it? And then it just disappeared, did you see where it went? (she puts the headband back on) *gasp* there it is... Raindrop? Where did you go? I found it!! (he chases after her, both laughing up the stairs).

His humor, which is both deeply entertaining and deeply irritating at the same time, hinges largely on the fact that every joke or high jinx he gets up to is done with a totally straight face. One day, on a particularly slow day at work, he spent an hour fully convincing one of his co-workers, with a dead pan face that while, yes the sun has always risen in the east, now it rises in the west. By the end of the hour, and a whole bunch of pseudo-physics explanation, the co-worker was convinced that this was quite obviously true. Later the co-worker was clued in by a fellow teammate that her chain was being pulled. The Husband was completely amused and chuckling over the incident which served to propel him through what had originally promised to be an extremely boring day.

He does not do this in any malicious way, and in point of fact his co-workers will often go out of their way to tell me how funny they think he is. Recently, he amused his department with his "sales tactic" for selling Girl Scout cookies, which consisted of picking up our middle daughter's picture with an utterly serious face and saying, "You don't want this little curly haired girl to cry do you?" followed up with, "You know, you haven't purchased cookies from us yet. You know, she is coming to take your daughter to work day soon. I am going to have to tell Raindrop that we aren't allowed to talk to you because you were so mean and didn't buy her cookies. If she doesn't meet her goal, I am going to have to hold you personally responsible" Everyone laughed.....and everyone bought cookies.

A short time ago, in a work meeting the department was asked to introduce themselves, tell how long they had been with the company and a little bit about themselves. After going around the circle with everyone's standard, "I am Joe Smith, I have been here for 2 years and I have 2 dogs." my husband decided to stand up and say, "Hi, I am [The Husband], I am a Taurus, I like holding hands and taking long walks on the beach, my favorite color is grey....oh and I have been here for [X number] of years and I work in [this department]." (for the record his favorite color is green.) Another meeting, which was long enough ago that I no longer remember the exact details, the supervisor mentioned how certain things were "optional" but was vague enough that The Husband chimed in with, "you mean, like pants?"

Now a normal human being would never be able to get away with any of this in the real world. But, there is just something about his irreverent sense of humor and his deadpan delivery combined with his keen knowledge of exactly where "the line" is that allows him to say things no one else would dream of saying out loud. He not only gets away with it, but it actually endears him to people. Obviously I am a bit biased, but after talking to friends and family, I find I am hardly alone.


It is also not unusual to look up in our house only to find stuffed animal friends draped over curtain rods, or on high shelves, perched on the doorbell box, or dangling from the ceiling fan. It has been going on so long at this point that the kids, who used to laugh hysterically, now roll their eyes and say in their most exasperated voice, "Dad, this isn't funny anymore." (Although in The Husband's defense, he didn't engage in this juvenile activity for a few months and the kids started hinting that maybe they might want him to start it up again, so I no longer buy their objections as much). 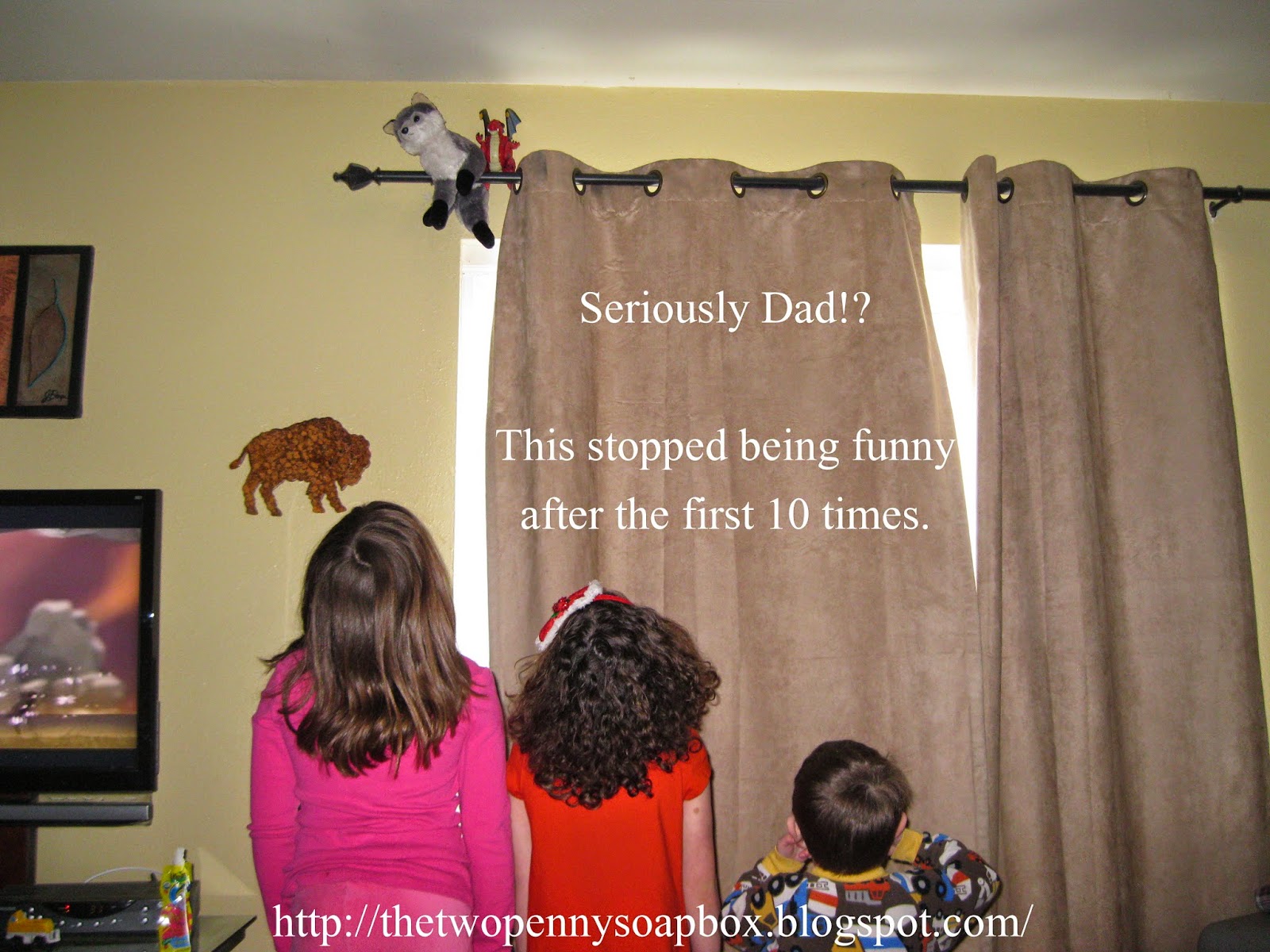 Ultimately, The Husband brings a special brand of humor to our lives and we are grateful for it, but don't be surprised if you see our kids roll their eyes and say in exasperated voices, "Silly Daddy."