Am I fighting a losing battle?

This post was edited by my Snowflake and other than a few changes, everything appears as it was originally written, so please share with anyone you feel needs a reminder that they are beautiful!

I was so careful.

I thought we had inoculated our children well enough.

I thought that modeling a certain way of thinking could somehow defeat an entire culture hell-bent on destroying my girls' body image.


This week my heart broke into a thousand million pieces in a matter of seconds, right around bedtime. I climbed up the stairs in order to ascertain whether or not my children were doing what I had asked them to do. Expecting to find all three of them brushing their teeth, I only found two. Heading out in search of my oldest daughter, I found her in her room running in place (something she has been doing fairly often of late).

"What are you doing? You are supposed to be in the bathroom brushing your teeth with your brother and sister."

"Exercising? It is 8:30 at night, you are supposed to be settling down and getting ready for bed."

"I have to exercise because I'm fat"

At this point the air was sucked out of my lungs and I felt like I was falling backwards into the abyss of time and space. A dreaded sense of horror filled me to my very core and I could feel the hot pricks of tears behind my eyes.

I took a deep breath and attempted to steady my voice.

"Mom, I realized I am too wide. I am much wider than most of my friends. That means I am fat, so I need to exercise so I can be skinny. Look at how round my face is, my friends have skinnier faces."

At this point in the story I feel it is important to point out that as an adopted child who is undeniably and irrevocably built like a square, I am extremely sensitive to this topic. My adopted parents are both tall and slender (read: built like bean-poles) and I spent most of my childhood wondering why it was that I looked like I could eat both of my parents and have room to spare no matter how much weight I lost. It wasn't until I was older that I realized, I am just built "wider," a genetic fact that all the dieting in the world wasn't going to change. It didn't help my self-esteem being immersed in the dance world either. I was always a good enough performer but constantly missing out on opportunities because my "look wasn't quite what they were looking for." Many times I heard at auditions that I was a "great dancer," but my build would "distract from the overall look of the line." Translation: we have all these skinny girls and while you rock as a dancer, you should focus on a solo career where you won't stand out as much.

As a result of my experiences I have spent the last 9 years talking about how much I love my body (true or not), how food is something that fuels your body and should be treated accordingly. In other words, food should be analyzed by how it makes your feel, not how skinny or fat it makes you. I have never controlled food nor have I made kids clean their plates. I have read, studied and emulated every study I could get my hands on promoting positive body image. I thought with enough research, enough dedication, I could protect my girls, or at least insulate them from the cultural obsession with appearances.

I have banned all glossy magazines with unrealistically skinny (read: airbrushed to the point of total fantasy) models and any doll where there proportions are such that they couldn't stand on their own two feet if they were actual real girls. I have never said one negative thing about myself outside of, "I shouldn't have eaten that, it didn't make me feel very good." And, I even forced myself to smile as genuinely as possible and tell my daughter, "thank you" and "Yep, that's how God made me" when she told me that she loved me so much because I was "fatter than Santa," and my "big tummy" made me so snugly and soft (seriously kid? Santa?). Earlier this year she asked me why I was so much "rounder" than most of my friends, and I will admit to dying a little inside, but instead of yelling at her for being disrespectful, I smiled and said, "Well, honey. God just makes all his people different, but we are all beautiful if we act beautiful."

How foolish I was to think I could fight the flood of images and messages thrown at our young girls with just one voice. How stupid I was to think that since she was built like me (unlike me and my adoptive Mom) that she would feel more connected and at home in her own body because I modeled that for her.

How could she feel this way? She is stocky and athletic with wide shoulders and a round face. She is not fat, or even overweight, just built like me, a natural born square. How can I tell her how beautiful she is? Why would she believe me anyway? I am just her mother. I am just someone who "has" to love her, not the rest of society who is giving her a completely different message. 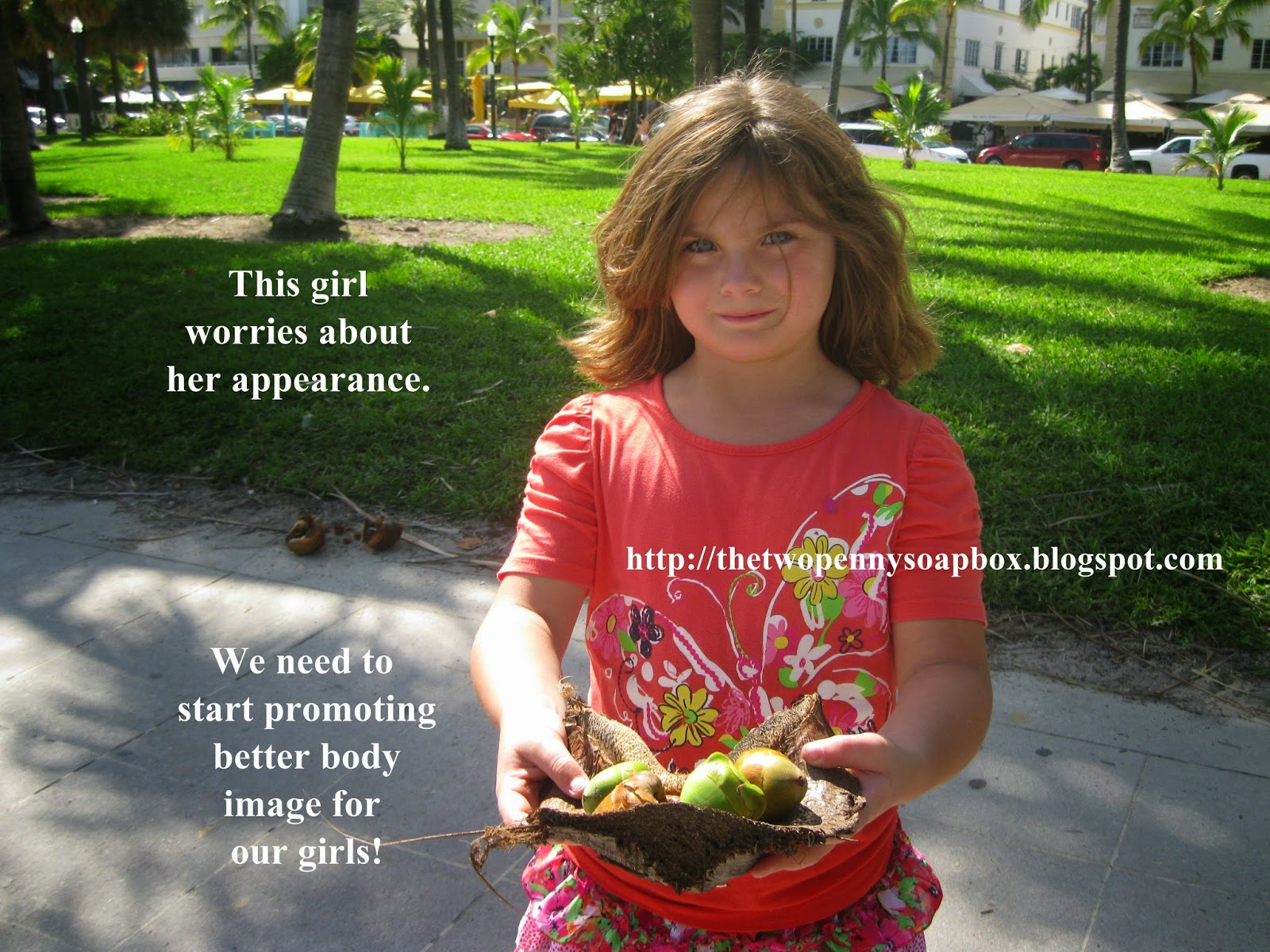 I went downstairs and cried. I cried not just for my own daughter, but all the daughters of America. I tried so hard to keep her from it, and here she is at 9 years old asking me if we can go to the gym more so that she can lose weight. What the hell!?!

After I pulled it together and talked with my husband I had a flash of insight. I walked upstairs and told her why I reacted so strongly to her feelings of being "wider" than most of the kids in her class. I told her that it hurt me because I think she is gorgeous just the way God made her. I told her that advertisers make millions of dollars every year by trying to convince her and everyone else that they are not pretty enough. I told her that if every girl saw herself for the beauty she truly is, entire industries would go out of business.

I then tucked both girls into their bunk beds and asked my oldest, "Do you have straight hair?"

"And do you (addressing my middle child) have curly hair?"

"And freckles too, right?"

(back to my oldest) "And do you have freckles?"

"Do you think your sister is pretty with her curly hair and freckles?"

"Yes, I think she is so beautiful."

"So you both think the other one is pretty, but you look nothing alike. You know mommy's friend Miss Julie? She is very, very tall. I think she is pretty. I think I am pretty too, but I am very, very short. So, you can see. We don't all have to look alike to be beautiful. We can look very different. It doesn't help to compare ourselves to other people, just be happy with you. I love you both so much, and I just want you to see what I see when I look at you."

And then I kissed them both goodnight and closed the door, all the while saying a little prayer that some of what I said sunk in. I prayed that somewhere in our country-wide obsession with looks, that my girls can find it within themselves to accept themselves just as they are.

In the meantime, we as a culture need to start being more aware of what messages we are sending. I now know I can't fight this on my own. I need help. We are seeing more and more things in the media like the Dove Self-Esteem project but it still feels like a tiny drop in a raging ocean.

Tell me, do you have or know kids who are struggling with body image? At what age did it start? Is it just affecting girls, or are boys experiencing this too?
I want to hear from you (just remember when commenting on blogger you need to chose the posting choice first- and possibly sign in. If in doubt, do what I do and copy your post so if it gets lost you can just paste it back in)
﻿