I have had a very hard time writing here this summer. In part from having all the kids here 24/7, but almost more so, because of the extreme funk I found myself in with the craziness I have seen circulating on social media. I am talking about the "discussions" (if we can even use that term) on racism in the police force, the SCOTUS decision on same-sex marriages, and the first rising tide of what I anticipate to be an intense presidential election season. The things I have seen voiced "out loud" on all sides of debates have been offensive, hurtful and down right intolerant.

I could tackle any one of those subjects, and in fact I already tackled election-time behavior back in 2012 with, Applying the Mom Pledge to the 2012 Election. But, despite voluminous articles (most of which I read) on the subject, I decided to explore my point through the lens of same-sex marriage. Ultimately the subject matter itself is not what I want you to focus on, but the process. There are too many people in America to expect us ever to be in total consensus, decisions are never going to please everyone, but I promise- there really is a way to disagree respectfully with love.

The day of the landmark SCOTUS decision legitimizing same-sex marriage, my Facebook feed was filled with celebration....and mourning. The hardest thing for me was watching as the celebratory joy that many of my friends felt as their families found a stronger foothold in the ability to speak out on their rights as caregiving workers (which is what this blog, and my grassroots Facebook group Valuing Families: A Social Movement are all about), was circumvented by the discomfort at the vocal disappointment from those in favor of "traditional marriage."

The joyfulness that I saw was quickly replaced by vitriolic hate that was spewed forth on both sides of the issue. Within the day, my Facebook feed had devolved to name calling and base insults. Some of my friends were painfully boastful, and others were uncomfortably bitter and resentful. My depression set in as I saw friends and family, people I love dearly, attack each other in an effort to "win" the argument for their side. Some of the things I saw flung at people I love were truly painful to see. The hate, the anger, the disgust. How could this be coming from people I cherish?

It took me a long time to process through these feelings and wrestle them onto "paper," and I am here to tell you, the truth I have come to is- there is no "side." We each speak the truth that we feel, and we each arrive at our own truths through our own experiences, education, culture, family and from plumbing (or not) the depth of our own hearts. You can argue, you can rail, you can even scream or threaten harm, but what you can't do is change their minds.

As an anthropologist I will tell you that for my first paper in graduate school, I was tasked to write a 10 page paper on the definition of marriage. The catch was, I had to make it universal for all faiths and cultures that we had read about thus far in our class. It has been a long time, but if I remember correctly there was a tribe of people from the Amazon rainforest who raided neighboring villages and stole their wives, who then became the one bride for all the male brothers in a lineage. We had to explain marriages in the sub-Sahara and Africa where resources are scarce so the males migrate regularly, and as a result, a woman would take more than one husband to provide income for her family. We read about marriage in the United States, both monogamous and polygamous and we read about the Arab traditions of taking multiple wives.

The list was much more extensive, but in each case we looked at the benefits to individuals and the surrounding area that each marriage system provided. We looked at children who were considered legitimate and illegitimate, and why, and how that affected their life outcomes. We looked at how each system helped individuals be successful in their particular culture and economy and what it would look like in that economy, or what would have to change, in order to superimpose our American ideal of one man-one woman in a monogamous marriage. In many cases, the local economy, or the ability to access resources would become untenable under a nuclear family lifestyle. Marriage systems clearly developed around what would provide the best possible survival for the people in question.

My thesis to this paper has stuck with me for years, and to this day guides how I perceive the concept of family. I especially see it being true in America, where family is undergoing such a dramatic (and scary and uncomfortable for some) transition to include families it would have never accepted 100 years ago. Today, our American ideal no longer (or usually does not) punish people for getting divorced, for becoming single parents, or teen parents, for interracial families, same-sex families, blended families, or families of open adoption. We have even grown to accept that people with disabilities have the capability to make decisions on their own lives in regards to love, reproduction and marriage.

My thesis was simple; the definition of marriage is the way a culture codifies sexual behavior, defines family responsibility and legitimizes children in the larger culture's eyes. In other words, we use the definition of marriage, regardless of the specifics, across the globe to dictate whether or not a child would be considered "bastardized" within the larger culture, to codify familial roles and responsibilities and who it is acceptable to be having "relations" with.

The stance of The Two-Penny Soapbox, and myself as its author, is that any definition of marriage that removes stigma from children and allows them to be accepted as treasured members of society, with the same rights, accesses, and opportunities as those whose parents are not divorced, young, old, blended, single, inter-racial, living with a disability or in a non-traditional relationship, is a definition that I will whole heartedly embrace.

But, defining marriage is not the point of this piece. The point of this piece is, that you will never change some people's minds about something unless they come to it in their own time and in their own way. I say this to my friends and family who find discomfort and anger in someone saying, "I condemn your lifestyle," or "being [LGBTQ] is a choice." I say this to some of my dear, dear friends who believe, all the way to their core, that God sanctioned marriage only between one man and one woman. Any other culture in the world that does not practice this, for them, is just a culture that has not been missionized yet. To all of you, please, be respectful. If you must, state your case with kindness, listen with an open mind, and then if you are not moved, agree to disagree. Name calling, threats, violence, hatred, fear, animosity- these things are not okay. Ever. Someone is not an idiot just because their world view profoundly differs from yours.

In my mind, finding God's grace and the spirit of Jesus is the single most important thing in the world. True love and acceptance comes when you can look at someone, someone who believes something so fundamentally different from you that it seems impossible that you can co-exist peacefully, and you listen to their story. Listen without forming the argument in your mind and waiting for your turn to speak. I mean, really, truly listen to the truth that is them, and then try to understand their viewpoint. When you do, you may find from time to time that you can connect with something within their argument that makes a grain of sense. Hold on to that grain and you will have discovered the common ground to try and love them for who they are and where they are coming from.

The world is full of breathtaking moments of glorified diversity. And in that diversity there is beauty, there is peace, there is the divine. There are people in the world that, despite what most would consider the unassailable evidence of science, still believe that babies are created by standing on a sacred spot, facing the sea and inviting their ancestors into themselves. Who are we to take that from them? What a beautiful belief system. A belief in the interconnectedness and joy of coming and becoming from a single line of people. Who am I to point to a diagram in the book of reproduction and say, "You are an idiot. You are wrong. You are ignorant and uneducated. Thank goodness I am here to show you the right way to believe"?

So please, in the wake of recent social unrest around racism, homophobia, and religious intolerance and the hatred born from fear that is rampaging social media- please take a moment and try to love your neighbor. Love them even if it hurts to look on them. Love them even as you fear their actions. Love them for the divine light that exists inside of them and accept that they have to follow what is true and evident to them, even as you do. Inequality exists. Hatred exists. Differences exist. But, what a beautiful world it could be if we all found a way to connect on a different level.

As humans, we are set adrift in a universe that provides life as diverse as it is populous. Embrace the beauty in the diversity. Look past the details and find the humanity underneath. You may find you are less angry, less fearful and more loving. And wouldn't that be a better place for all of us to be?

With that, dear reader, I leave you with this;

As we always hear - kindness costs nothing and love is free.

So mind your words. Speak with respect. Disagree with love. 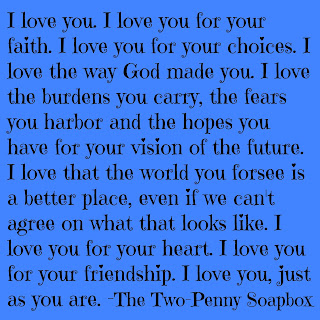